Birding: A Flock of Irreverent Essays 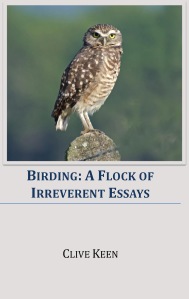 This new eBook, comprising 40 essays about birds, birding and birders, will shortly be available from Amazon.

The Introduction is as follows:

Birding seems peculiarly fitted to reflection, and not simply of the “What the heck am I doing here standing in the rain” variety. A lot of birding is done alone, without distractions, and it is natural to start to reflect on the experience. “Do birds do things for the sheer fun of it?” is a natural thought when you see a raven gyrating in a high wind. “Should I do something about it?” is a truly pressing question when you see a predator grab the bird you’ve been admiring. Sometimes reflections verge on the flippant: “What crime did an owl commit to get itself called flammulated,” or “How come birders talk of a bill rather than a beak?” Often the reflections are ones that could be shared only with other birders – questions about the ethics of ticking, for instance – but sometimes they could be shared with everyone, such as what it means to be completely in the moment.

The articles in this book have mostly been – or will be – published in BC Nature and BC Birding. I started out writing my reflections as semi-humorous articles for BC Nature, in a column called “Natural Mistakes,” but quickly discovered two things. First, I was writing articles at a far greater rate than were needed for the quarterly publication. Secondly, I found that my natural inclination was to write two essays at the same time: one humorous, and one more thoughtful. That led me to contribute articles for BC Birding, in a column called “The Reflective Birder.” You should be able to see which article in the book was written for which publication. If you laugh, I hope it was one written for BC Nature. If it makes you think, it is more likely to have been written for BC Birding. I hope you find that each of the essays achieves at least one of those two outcomes.